The Black and White Canvas Series

It is the coldest day yet of the Tasmanian Autumn and I find myself driving through Deloraine at 8 in the morning on my way to meet Tony Smibert and his wife Carmel Burns for breakfast. Snow has fallen along the Western Tiers during the night and little transparent puffs of mist and cloud are chasing their shadows along the ridges as I turn off from the Mole Creek Road, into the ordered tranquillity of the Smibert house and garden.

Tony is on the phone in his studio as I arrive but leaps out of the door to greet me, and we walk straight through his office with its cases of Japanese kimonos, gold framed paintings, and half opened boxes of 200 year old watercolour pans, and into his studio. It is a year since I have visited, and he is eager to show me what he has been doing. He  has told me something of what to expect.

He has been thinking of Malevich's black square and exploring this highly formal notion in a much bolder way than he has worked before, influenced also by Jackson Pollock and American Abstraction, themes he started working on at a large scale about four years ago. Using jet black acrylic paint on large square white canvases he has been producing a great number of what I can only call 'Protolandscapes'. Sometimes these are just a line or a series of lines wandering across the centre of a white panel, turning into a brushstroke and vanishing again; sometimes layer after layer of washing out and repainting to produce something surprisingly close to his watercolour landscapes.

Peaks, mists, troughs in the ground where water settles. What brush is he using? A yard broom. Yes; of course. Why not? Some of the paintings resemble etchings or dry points and, as I look at them I find it hard to think of them as being by the same hand that produces luminous watercolours only a handspan wide and employing the full gamut of romantic imagery; turbulent skies, distant waterfalls, mountains and wheeling birds. “Travelling through landscape that impresses me - like the Pass of Llanberris in Wales - I always try to photograph or sketch, even though I seldom return to my photos and only occasionally, my sketches. But then, years later, I’ll suddenly know that what I’m painting is a reference to that earlier moment. Or, when looking back through photographs or sketches, see where it came from...da Vinci wrote:
‘Artists should look at certain walls stained with damp, or at stones of uneven colour... they will be able to see in these the likeness of divine landscapes, adorned with mountains, ruins, rocks, woods, great plains, hills and valleys in great variety...’ "

But as I look through the studio window at the little snow clouds scurrying along the tops of the Western Plateau, the transformation becomes more real. There is a landscape suggested in these large monochrome panels too, and the drift of clouds I am watching outside the window is echoed in many of the paintings; but these striking panels are not local landscapes. They are inscapes, landscapes of the mind, spare, elegant and entirely true to a vision which Tony has worked on and taught to many hundreds of students over the last 30 years. Over that time Smibert has become an acknowledged master of watercolour technique. He has demonstrated and lectured in several major museums in Australia and the UK and at some of these events demonstrated his improvisatory water colour techniques in joint performance with the gifted pianist Ambre Hammond, occasions which no one who has attended them is ever likely to forget.

His most recent published work, on the technique of the English watercolourists including Turner, has been produced over the last two years in partnership with the Tate Gallery in London and is already a highly acclaimed and popular book. Are these new landscapes a holiday from this prodigious labour? Perhaps they are, but looking at them ranged around the walls of his studio I feel that Tony is embarking on the next stage of an adventure which began 30 years ago when he arrived in Tasmania with infinite energy and an ambition to live by painting watercolours. Smibert's insight is that there are natural forces at work in the act of painting too: in the materials used and way they interact there is an element of chance, that may or may not develop into a recognisable image. But does it matter whether it does or not? Clearly he has reached a stage in his work where he feels equipped to invite risk into his painting on a dramatic scale and with risk, the excitement that walking along a tightrope engenders. After half an hour in the studio examining the canvases stacked around the walls or another series stored in one of the barns we repair to the kitchen for breakfast and then head out with our dogs to the frosty laneways behind their house.

Carmel joins us and for half an hour we walk, and talk about our now grown up children, friends, movies, and politics. I know Tony will be tied up with a Skype meeting from 11 on but at five to there is already a bleep on his mobile. Is he ready for the conference? He fields the enquiry deftly and we say hasty farewells. I drive back with my mind a medley of what I have seen that morning and the unending vista of the snowbound Tiers bidding me a long farewell. As I write these lines a few weeks after that flying visit I have an earlier Tony Smibert watercolour propped on a chair in front of me. It is a delicate mountain landscape in muted blues and greys and though the whole surface quivers with restless energy there is a still point just to the left of centre, a band of luminous mist to which my attention is continually drawn and where my eye rests. Is this little gem in watercolour different in kind to the Tachist abstractions, larger by a factor of ten which Smibert is currently painting? Yes. They are very different, at least in scale and boldness; but the purpose behind them, to evoke space and movement with extreme economy of means while composing quickly and spontaneously in response to the moment, has not altered. Large or small Tony’s work centres around his delight in watching how his medium performs; introducing accidents onto paper or canvas and finding his way through them into an image of landscape. These new paintings are not just his watercolours writ large, they are different. I think of them as Protolandscapes, powerful monochromatic evocations of landscape, and two weeks after my visit I can still see them vividly in my memory. They seem semi transparent, as if someone were moving a light behind them, and mountains, mists and lakes drift somewhere between me and the canvas. Whatever name is given to them they are original and powerful evocations of landscape by an artist at the peak of his game, who is well educated in the pictorial conventions of landscape painting and is engaged in writing new ones. He has in my view already succeeded, and I think I will not be the only person in the world whose imagination will come to be enthralled by these sombre but light filled images. PRELUDE (to the American edition)

There is a plaque in the Granary Burying Ground in Boston, Massachusetts commemorating the unmarked grave of artist John Smibert (1688-1751). This is unsurprising when one learns that Smibert was the first portrait painter of distinction to earn a living in Colonial America, and was proprietor of what is arguably the first American art gallery, opening in 1734.

Smibert’s paintings open windows into that waning period of Baroque colonial society, in the lead up to the American Revolutionary War prior to the formation of the United States of America. As a migrant to the Americas, Smibert arrived with a decidedly European aesthetic, yet there is something in those fresh-faced, eager-eyed sitters that signal that something was different; Smibert’s subjects are not the pampered aristocrats of the Old World, but the adventurous pioneers of the new!

A century later and in another branch of the Smibert clan, that same sense of renewal encouraged migration to the even more distant colonies in Australia. It is in this antipodean branch that we find the subject of this monograph, the contemporary Australian painter Tony Smibert. Like his Baroque portrait painter ancestor,

Tony Smibert is an artist who has explored the crossing and mingling of contrasting worlds – the Old World techniques of Romantic watercolour painting, the ancient Eastern traditions of Zen and Taoist brush painting, and the possibilities that a hybrid sensibility might enable. 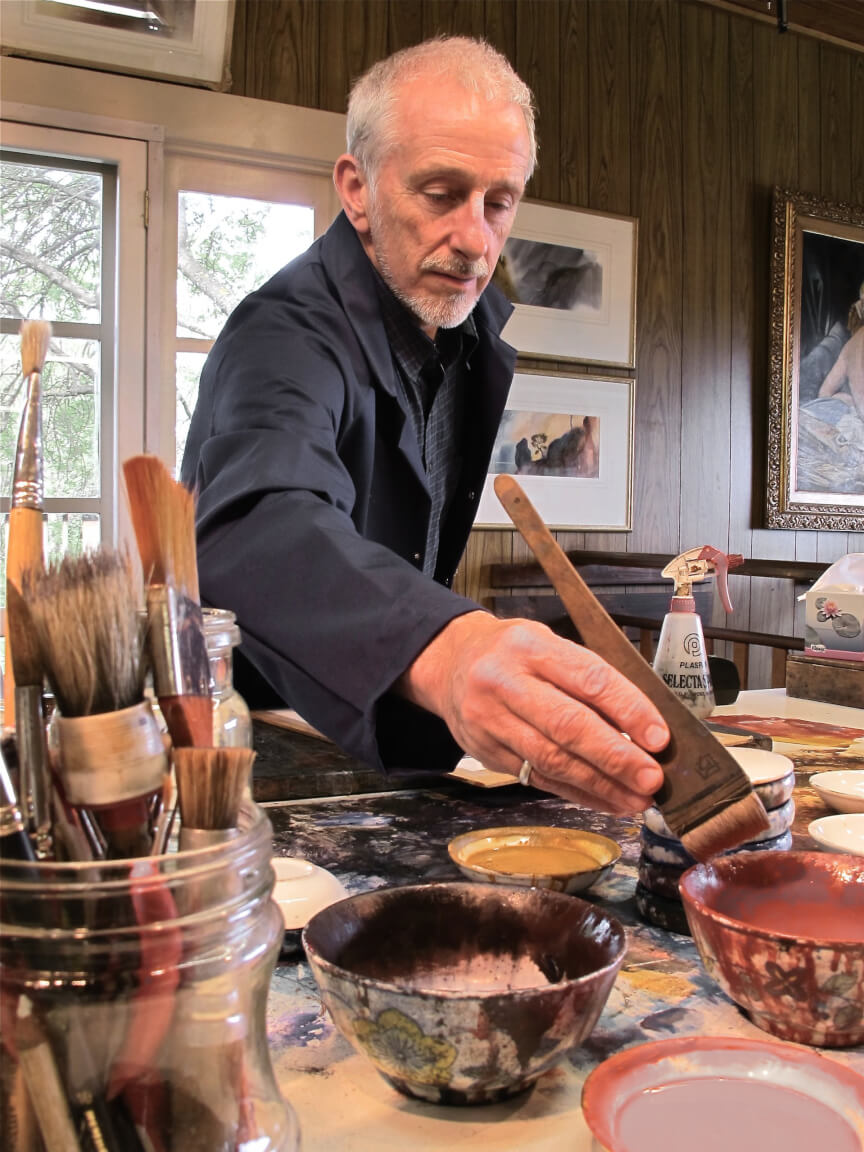